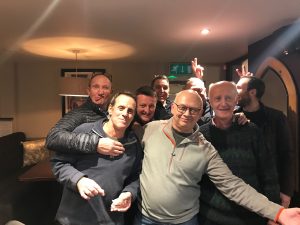 Celebrations in the White Horse

It was a case of “Up yours, Delors”, “Stick it up your Juncker” “Bugger off Barnier” and “Take that Tusk” as, in an astonishing turn of events overnight, the Cheshire village of Great Barrow became an independent trading nation. At 11pm GMT on March 29th a Unilateral Declaration of Independence was issued following a series of “meaningful votes” in the White Horse pub, aimed at breaking the deadlock that has paralysed the parish for almost 3 years of constitutional crisis and recrimination.

The self-elected Ayatollah of Barrow, President Sir Nigel Heardwenger (retd) was buoyant about the future. Clutching a celebratory Talisker 18 year-old Malt he laid out his plans:

“It’s tekken some doin’ but ah’m reet chuffed wi’us gerrin ‘aht at last” he burbled between sips. “We’ve bin ‘eld back from us natural entrepreneurial instincts by them boogahs in Brussels wi’t snouts in t’trough but from now on we’re tekkin back control”. 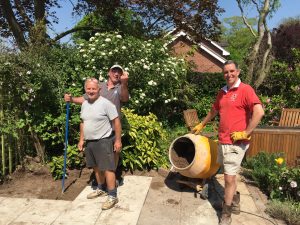 Heardwenger’s nominated Vice President, fellow Yorkshireman Astronomer Royal Lord Tillotson of Hollowmore went on to reveal that free trade agreements had already been verbally sealed with West Yorkshire, Russia, Tarvin and Kelsall. “There are a couple of minor details and alternative arrangements to sort but I’m confident we can secure the deals we want. With the Russians for instance I can exclusively disclose that in return for fracking rights on the Bowling Green and the field at the back of Manor Close, we have been able to secure the future of Barrowmore as a “Troll Factory” generating hundreds of new jobs in social media.  The Parish Magazine, renamed “Barrow Today” is also being taken over by the Lebedev family as part of their growing UK media portfolio and will now feature a monthly field sports and lifestyle tips column from President Putin himself.” http://en.putin.kremlin.ru/interests

In more good news the brass section of the Jan Modelski Orchestra will be invited on an extended friendship tour of Siberia. A villager commented “It’s brilliant that the Russians are taking the brass section off our hands for at least a year, especially that bloody tuba!”

Heardwenger was tight-lipped when pressed on the source of marketing funds for his successful “BARROW’S BETTER OUT” campaign and accusations of Kremlin supported underhand tactics to influence his preferred result. “We’ve nowt to hide – the Waring Passion Wagon needed a new paint job and Cestrian Signs were only too keen to help out. Besides, Alex is in Australia.” 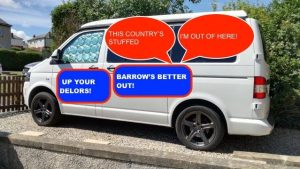 As the church bells rang out and villagers celebrated in the streets, the basis of Barrow’s future relationship with the EU became slightly clearer. “It’s a No-No-No-No deal” commented a jubilant Brigadier Tufty Weaver (retd) “Chief Armstrong chaired an emergency Cobra meeting and as a result me and Jack from Iraq round the back are looking after transitional security arrangements – our first task is to stamp down on the excessive use of power tools in the Florida Bible Belt. I can’t wait to get the old camouflage fatigues on to enforce a 7pm-10am curfew” he said, polishing his newly issued AK47 assault rifle.

In marked contrast to events in Westminster, Barrow’s approach has been decisive. “We’ve opted to ignore the Plemstall backstop and go for a customs barrier along the Rover Gowy” explained Tillotson. Rear Admiral de Dobbs, First Officer Greenwood and Able Seaman Smith will ensure no contraband gets through and we’re also building an environmentally friendly, recycled wall made out of mattress bases, pallets and salvaged urinals from the White Horse – nobody will get through that, and if they do we’ll smell them coming” 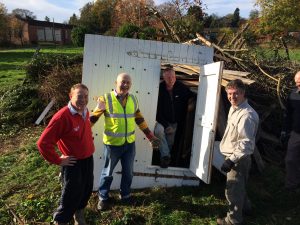 The exact trading arrangements are still to be published but it is thought that Barrow is confident it can secure a Liechtenstein Plus-Plus arrangement with Norway 2 elements and a dash of Canada thrown in for good measure.

Heardwenger glanced up briefly from the Times crossword at his exclusively reserved table in the conservatory of the Blue Bell café and surveyed an impressive array of pallets in the car park. He was suitably defiant :

“We’ve allus been a trading village with an eye to the world beyond Broomhill and Long Green and I have tekken t’precaution of having a whip-round for Fatha Farrell to make a stockpiling run in’t wagon to Calais to secure enough emergency supplies of pharmaceuticals, Rioja and Jarlsberg cheese to get us through any temporary embargoes.  We’re also digging up spare land around the village to grow genetically engineered root vegetables and have offered to install chlorine showers free of charge in chicken sheds. 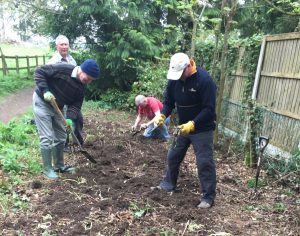 Whatever happens we’re ready for it. As for them mardy daft ‘aporths across t’Channel, let’s face it, they need us more than we need them.”

From our Article 50 correspondent